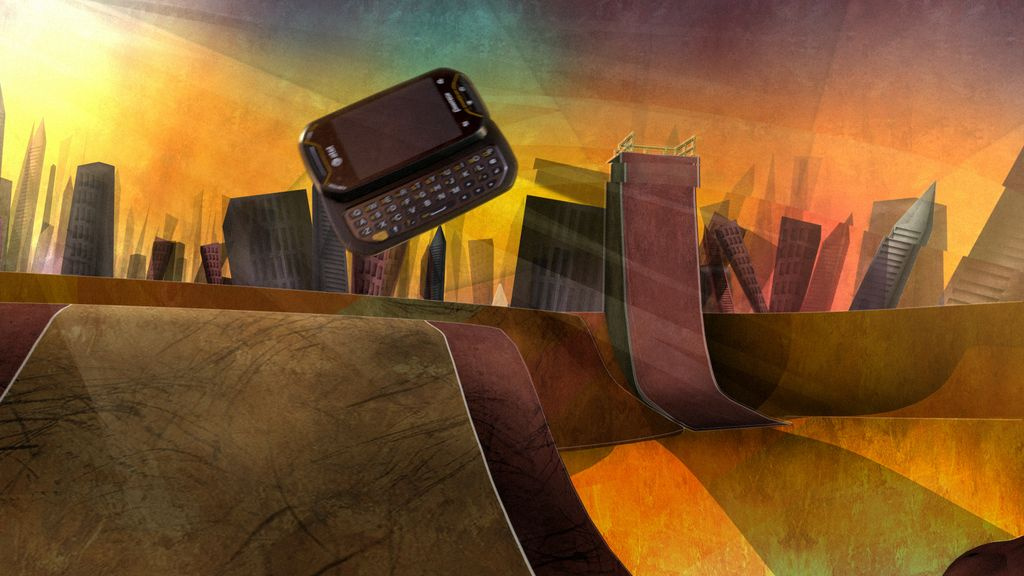 26 Artists + a Whole Lot of Software

The making of The Mill’s over-the-top Pantech spot in just 3 weeks
If you need a CG handheld phone to execute jumps and take turns like a pro, you’d better ask a veteran skateboarder how it’s done. That’s what The Mill NY did when BBDO Atlanta approached them about creating a fully CG commercial promoting Pantech Wireless’ sponsorship of the 2011 Dew Tour (http://dewtouroc.com).
Mill editor and longtime skater Ryan McKenna poured over skateboarding, snowboarding and surfing videos for inspiration while working alongside creative director Mario Stipinovich, design director Jeff Stevens and art director Emmett Dzieza on the spot. The result is a stylized world that artfully combines illustration, cubist geometry and motion with the help of MAXON’s Cinema 4D, Autodesk’s Maya, After Effects and a bit of Houdini and XSI.
The Pantech phone’s shape steered the creative team toward designing around board sports related to the tour since it “would have been a hard sell to make it behave like a BMX bike,” Stipinovich says, laughing. After doing some research on various types of moves, the team presented a reference board of some angles from surfing and skateboard photography that they thought were particularly cinematic.
Once the board was approved they moved on to creating a more linear storyboard and a live-action edit that helped with workflow. Working in the same room for the duration of the project enabled The Mill’s core team to collaborate while still sticking to their tight deadline—just three weeks from pitch to finished 30-second spot. “We had an editor, a 3D artist working on previs, and Emmett and Jeff were building the skeleton of the thing,” says Stipinovich. All told, 26 artists worked on the spot.
Real-life moves became real tricks for the crossover phone in the hands of 3D animators Ross Scroble and Sam Crees, making it possible to lock an edit in the first week of production. “Ryan’s edit gave us the cut points and transitions, and he was able to sort from existing footage for about 75 percent of this thing,” Stipinovich says.
Next, the design team went to work creating three different environments for the skateboarding, skiing and surfing portions of the spot. Each colorful, abstract world was designed to flow easily into the next and the look was inspired in part by cubist paintings. It was freelance illustrator and designer Bryan Louie’s job to turn those modernist visions into illustrated environments the 3D artists could build off of.
Once the animation and look were finalized, the design team used Cinema 4D to make the environments come alive. “It was great and it allowed us to projection map the illustrations onto the geometry we built,” Dzieza explains. “It was a seamless workflow because we were able to map illustrations onto the geometry so easily with Cinema 4D’s Projection Man.”
This project was one of the first big jobs for which The Mill NY has used Cinema 4D. “And it really expanded our capabilities with Cinema 4D a lot,” says Stipinovich, adding that projection mapping was used most often but for some scenes they did unwrap the UV’s so they could work with BodyPaint 3D.
Artists used Cinema 4D’s Dynamics to get the icicles hanging from the railing in that scene to drop and fall to the ground. They created snow shaders and crystal rock shaders that came in handy for the skiing scene and Cinema 4D’s Sketch and Toon helped them add a dynamic, graphic look. The Pantech phone was created with Maya and XSI.
Creating the wave for the surf scene turned out to be the most challenging thing to pull off, Dzieza says. “The smallest inconsistency with one of these particle animations and it just looks wrong, so it was a pretty big bite to take off for such a short amount of time and I think every artist on the project touched that scene.”
The video clip:
http://www.themill.com/work/pantech-the-skate-phone.aspx
Find out more about this project:
http://www.cgsociety.org/index.php/CGSFeatures/CGSFeatureSpecial/skate_pantech