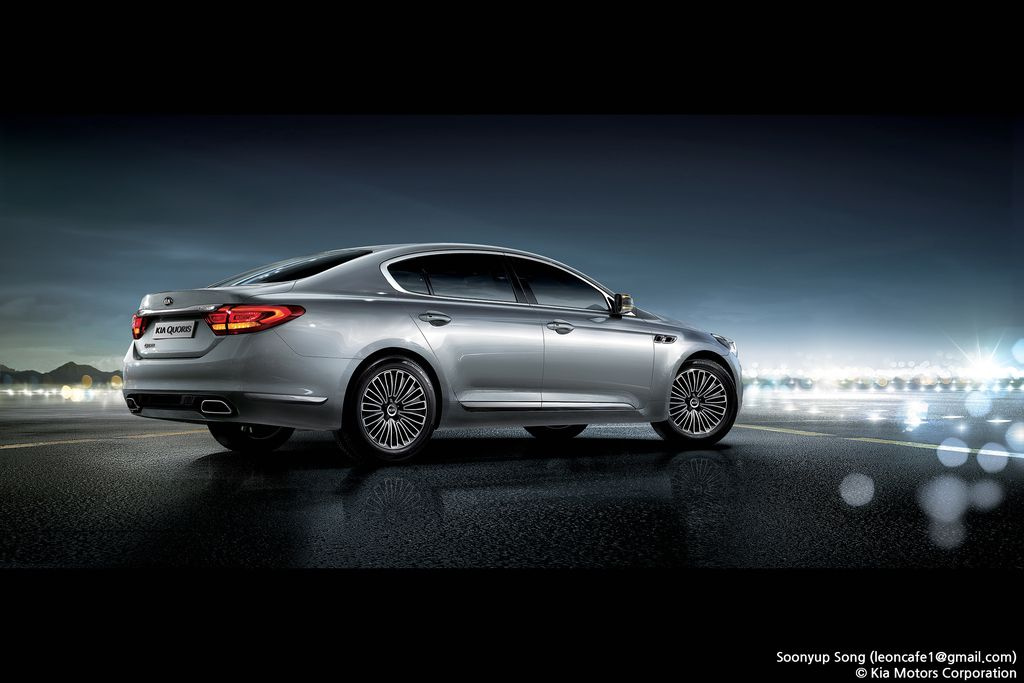 In the past, traditional photography was used to create exterior and interior shots of various KIA models but for the new KIA Quoris, exterior shots were created entirely as CGI. Mr Soonyup Song, head of the 3D communication team at Seoul, Korea-based Moss & Dew and expert for 3D content and planning, saw this challenge as an opportunity.
The existing photo catalog was made up of images created using traditional photography, and this project demanded that images of the new Quoris be created as CG – with the same consistent look and within a tight project schedule. Modifications during the course of project completion were also probable.
The introduction of a new car model and its marketing orchestration down to the last detai is an elaborate and costly process for any manufacturer and is designed to ensure maximum impact. Photos of upcoming models shot in secret undermine the effectiveness of these marketing measures. The fact that the new KIA Quoris only existed as a virtual 3D model made it impossible to photograph. In addition to the cost-saving factor and the enhanced creative freedom, the increased security for KIA’s intellectual property rights was a key factor in the decision to use 3D renderings.
“We had to create photo-realistic, high-res images at a resolution of 60 cm x 40 cm, which meant that we had to pay very close attention to even the smallest details with regard to materials and lighting in order to achieve the desired look within the tight deadline,” Mr. Song recalls. “Because all images were being created for print, almost all models had to be high-res, which resulted in scenes with 30 million to 50 million polygons each. On top of this, many optional vehicle parts and colors had to be taken into consideration and the background had to be very appealing. We had to define a workflow that could handle large amounts of data effectively and also quickly generate previews so we could fine-tune the scene settings.”
Mr. Song decided to use his software of choice, MAXON Cinema 4D, to meet this challenge. Mr. Song has relied on Cinema 4D for several years now as a primary tool for 3D content creation. Both low-poly as well as high-poly models were created for each model. The low-poly model was used while setting up and lighting the scene and then replaced with the high-poly model for rendering.
“This project would have been impossible to complete within the allotted time without Cinema 4D’s XRef function,” says Mr. Song. “In the course of this project, numerous parts were assembled and modified based on original parts, and design changes were also made every now and then. We saved all parts in a single archive and replaced them with XRefs as needed, which made it possible to create a very effective workflow. When a design was modified we didn’t have to manually update each scene – all we had to do was modify the archived object and every scene was updated automatically! XRefs made it possible to dramatically speed up the project’s workflow and increase it’s efficiency,” explains Mr. Song.
Artist Jinill Kim also modeled the background in Cinema 4D to achieve the best match for the Quoris. The imagery for the new KIA Quoris – from modeling to rendering – was created entirely in MAXON Cinema 4D.
“Our client, KIA Motors, was very happy with the result and was very impressed by the power of Cinema 4D. We are proud of the fact that we successfully met this challenge, and a large part of the credit for this achievement goes to Cinema 4D,” states Mr. Song.
Cinema 4D’s basic renderer was used to supply quick feedback during the project’s creation. Final rendering was done using Cinema 4D’s fast and reliable Advanced Render feature.
Moss & Dew Website:
www.mossndew.com
Website KIA:
www.kiamotors.com