by Henry Winchester   September 12, 2017   Art   0 comments
Ian Spriggs talks to CG Labs’ Chris Nichols about his incredible imagery.
CG artist Ian Spriggs is one-of-a-kind. He’s created characters for illustrious VFX studios such as Mr. X and ILM on films such as Batman v Superman: Dawn of Justice, Harry Potter and the Deathly Hallows: Part 1, and Warcraft: The Beginning. And right now, he’s creating gruesome monsters for Neill Blomkamp’s Oats Studios shorts Rakka, Firebase and Zygote.
In his spare time, Ian perfects his craft via portraits of close friends, family — and even Neill. They’re strikingly realistic, showing the same painstaking attention to detail, composition, pose and lighting as the Dutch Masters in the 17th century. But they’re completely CG, with state-of-the-art hair and skin shaders accurately simulating their real-world counterparts.
Naturally, Ian’s work caught the attention of CG Labs’ Chris Nichols, who’s attempting to create the ultimate virtual people via the Digital Human League project. In this conversation, the two talk about Ian’s career, his influences, and the process behind those marvelous portraits. 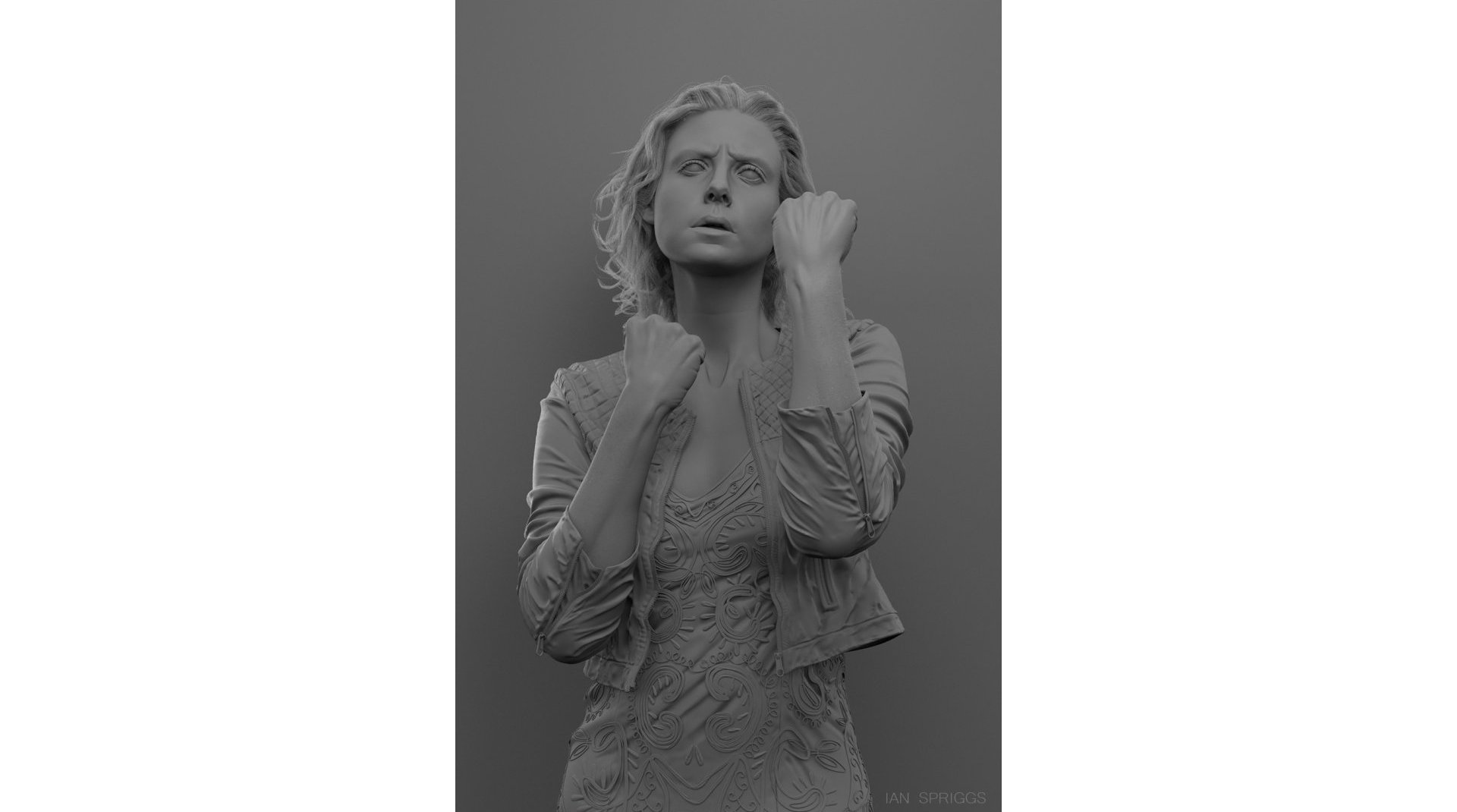 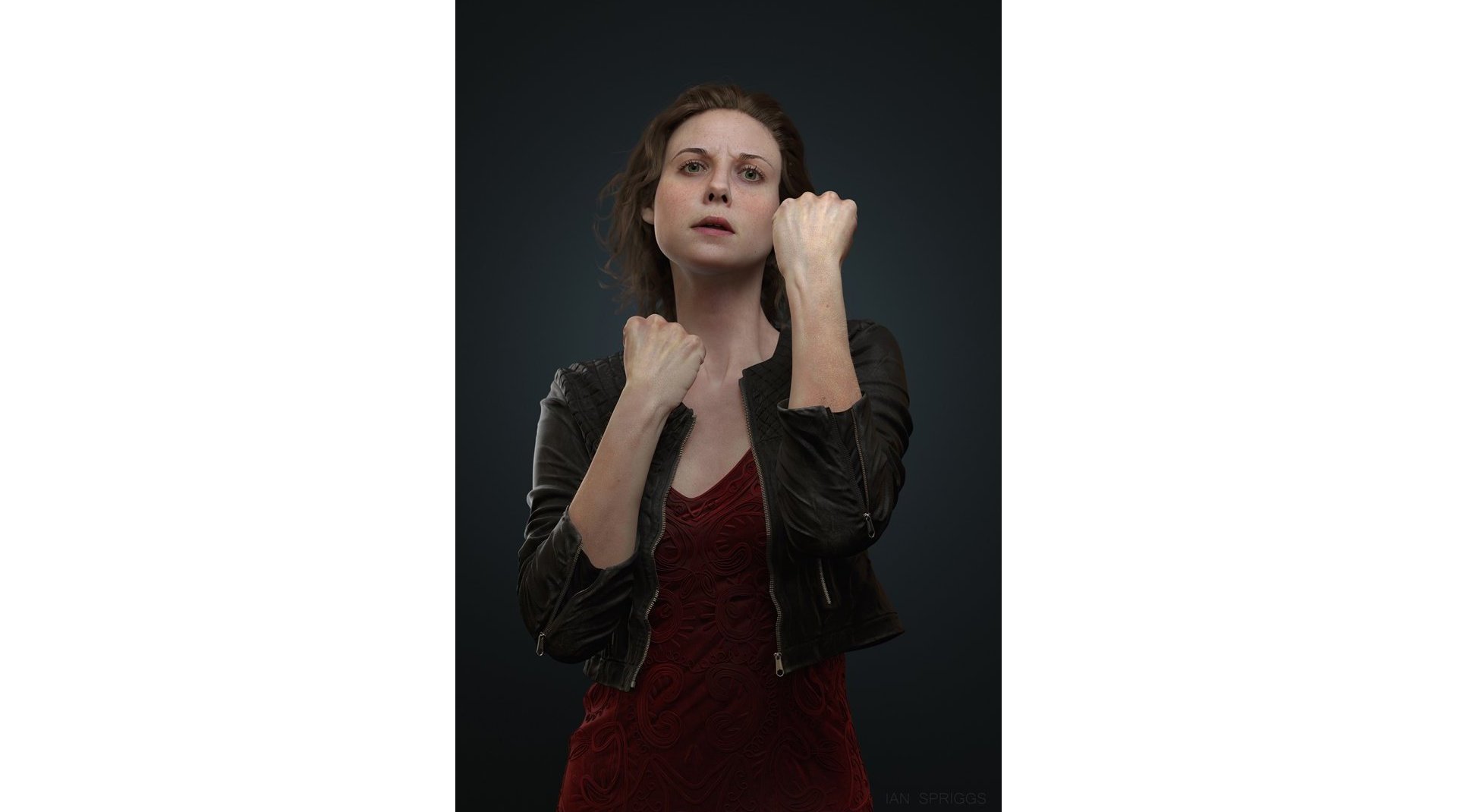 Chris: Your portraits seem to be inspired by fine art. Is that something that you’ve studied?
Ian: I went to art school for five years, I have a bachelor of fine arts degree, and I studied a bit of art history. The masters have always been one of the peaks of art for me. They’ve accomplished, aesthetically, some of the greatest work ever created. I feel like we should always refer to that in a way, always learn from it but move forward as well. It’s my anchor, I guess.
It seems a lot of your portraits are inspired by the Dutch masters, too.
Yeah, I studied a bit of that. For example, the portrait of Richard Spriggs, it was like one particular image by Rembrandt, which I absolutely loved. I set up the same type of lighting when I got my brother to come by. I got him to pose in the same way, and I took a whole bunch of photographs. I wasn’t copying Rembrandt directly, but I was letting him inspire me and trying and recreate some of the work he’s done.
And did you do a portrait of your dad?
Yeah. I’ve done portraits of every single one of my family members so far, apart from my nephew. I find children so hard, but I’m just going to wait until he’s grown up a bit. I’ve gotten both my brothers, sister-in-law, and both my parents. I try to focus on what is important to me, and my family is close, so I decided to do all of them.
The one of your dad, it seems to be set up like he’s an architect. Is that correct?
He’s a piping engineer, but he used to do a lot of hand drawings. It never used to be on the computer, so he would always be doing the drafting drawings. He had some really intricate detailed drawings, which he showed me, and they were really cool. The drawings by themselves were like art. He’s got that background in the engineering and the math side of art.
What inspired you and your brothers to go into art?
I have two brothers. My younger brother is the animation supervisor at MPC in Vancouver. He’s pretty good, in my opinion. My older brother, he’s an installation artist. He’s just had a show in Pittsburgh, and he’s shown work in Dubai and China. He works on a large scale, like 20, 30-foot.
From a young age, we always loved to be around art and drawing stuff. My parents would teach us the basics. My mom would teach me how to, instead of drawing noodle arms, actually look at the anatomy, look at the elbow, so I’d draw a little angle for the elbows. Then having two brothers who also liked art, we kept inspiring each other to do better work. It’s still something we communicate about.
What are some of the things you’re doing Neill Blomkamp, if you can say?
I’m doing creature and character models for him. I can’t tell you too much about the actual work, but he’ll come up to me like, “Oh, I’ve got this great idea. I need this creature.” Then he gives me some concepts and ideas and I’ll have to help design it, as well. Then spend a couple weeks modeling this creature. It’s pretty fun!
Could you talk me through the process of creating your amazing Steve Wang portrait?
Steve Wang is a close friend of mine. He’s a concept artist. I like his work and it’s like I asked him if he wanted to do a portrait, he was totally down for it. At the studio I set up a whole bunch of lights and get a little space organized. I’ll look at some of the artwork from the masters for inspiration and some ideas.
Then I  just take photographs, try out different poses, and change the lights a whole bunch of times. He’ll probably give me an hour of his time just to take photographs. I’ll take a 360-degree rotation, as well.
Once I’ve got what I need, I can start the model.

I already know what it’s supposed to look like. I’m just fixing the problems until it looks like what’s in my head.

So you just model, you don’t do any photogrammetry or anything?
Pretty much. I use a pre-made base mesh I built a while ago which is rigged. It’s easy just to pose and have something to start from. The model doesn’t take too long, then I try to get the lighting done right away.
I work mostly to camera. Once I get the lighting pretty good, I find texturing a lot easier. It’s never a linear workflow. It’s very random, jumping between lighting, texturing, compositing, back to modeling—it’s like you’re untangling a knot. I already know what it’s supposed to look like. I’m just fixing the problems until it looks like what’s in my head.
What are some of the tools you use?
Maya, Mudbox, Photoshop. I use Mudbox for texturing, and the rendering is done with V-Ray for Maya.
How are you doing the hair?
In Maya, with a V-Ray material attached.
How do you find time to do your portraits, considering you have a day job?
I don’t really see it as work, to be honest. I know people watch TV and relax, but I find it relaxing just to work on portraits. I don’t even spend too long on it. It’s not like a race to try and get things done. As long as you work a little bit on it every day, and you don’t ever push so much you get sick of it, you get a lot more done.
What would be your dream subject as a portrait?
That’s a good question. I think I’m still trying to figure that out. It’s definitely the human figure. I guess finding a subject where I can express the mood of the person through their eyes, rather than the physical appearance of them. With the masters, you always felt like you see a painting and know what that person’s feeling. Some of these paintings are hundreds of years old but you can look at them and you know exactly how they feel.